Posted on September 9, 2015 by ChristinaLi 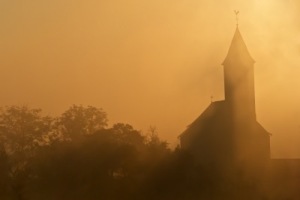 Acts 15:1-2, 6-9, 13-17 “And certain men which came down from Judaea taught the brethren, and said, Except ye be circumcised after the manner of Moses, ye cannot be saved. When therefore Paul and Barnabas had no small dissension and disputation with them, they determined that Paul and Barnabas, and certain other of them, should go up to Jerusalem unto the apostles and elders about this question.” (6-9) “And the apostles and elders came together for to consider of this matter. And when there had been much disputing, Peter rose up, and said unto them, Men and brethren, ye know how that a good while ago God made choice among us, that the Gentiles by my mouth should hear the word of the gospel, and believe. And God, which knoweth the hearts, bare them witness, giving them the Holy Ghost, even as he did unto us; And put no difference between us and them, purifying their hearts by faith.” (13-17) “And after they had held their peace, James answered, saying, Men and brethren, hearken unto me: Simeon hath declared how God at the first did visit the Gentiles, to take out of them a people for his name. And to this agree the words of the prophets; as it is written, After this I will return, and will build again the tabernacle of David, which is fallen down; and I will build again the ruins thereof, and I will set it up: That the residue of men might seek after the Lord, and all the Gentiles, upon whom my name is called, saith the Lord, who doeth all these things.”

We have found that there is a praise that happens in David’s tabernacle. There is a bowing, humbling, submitting. There is singing and clapping. There are true worshippers.

Jesus said, ‘I have come to seek and to save that which was lost.’ Not, ‘THOSE which were lost, but THAT which was lost.’ That is worship. Jesus was seeking that Kingdom. He wants to fill true worshippers up with what He once had. David stood between the tabernacle of Moses and Solomon’s temple.

Saul was king, first king of Israel. Saul wanted to bring the Ark of the Covenant out to the battlefield, but he did not have a pure relationship with the Lord. Saul and his army lost the battle and the Philistines captured the ark and put it in the temple of Dagon. They propped it up right next to the statue that they worshipped.

The next day, Dagon had fallen down. He had bowed down at the ark. The Philistines propped him back up. Dagon was there and the ark was there. The next time, their statue broke. They wanted to get rid of the ark. God judged the nation of the Philistines. The ark didn’t belong there. The ark had to go back. They took two cows that were supposed to be nursing their young and hooked them up to a cart and sent it away. The cows left their young, completely against their nature, and walked to the border of Israel.

People still disrespected the Ark. So, it sat for many years in a man’s house. Saul lost the kingdom and David became king. David knew how to worship and pray. He had a relationship with God. He had a desire to serve God. His heart was after God. If you want to make God mad, let your heart be far from Him. Let your insides be different from your outside and God will get angry.

God is looking for the heart that worships.

As a young boy, David had a heart that worshipped. When Samuel came to Jesse’s house to anoint one of the sons king, it wasn’t the best-looking brother. It was the little one, David. Samuel dumped a lot of oil on his head and anointed him the next king of Israel. You’d have thought they’d have blown a trumpet and announced it to everyone, but he was sent back to the fields and took care of the sheep and continued to do what he’d been doing—caring for the sheep and worshipping the Lord.

In fact, David served his family, bringing them food when they were in battle. David was a fierce warrior all by himself. He was also a soft-hearted worshipper. He had killed bears and lions. It’s rare to find someone who will fight Goliath and then go back and pray and praise the Lord.

Saul called his armies the Armies of Israel. David called them the Armies of God. David knew they were in covenant with God. ‘They that do know their God shall be strong and do exploits.’ Not because they’re strong, but because they Do KNOW their GOD.

If you don’t know God, you will not make it in battle.

Before Goliath woke up, he may or may not have been dead, he cut it off with Goliath’s own sword. This wasn’t clean at all. War broke out and all Israel went after the Philistines. David brought that head all the way to Jerusalem and took it to the Place of the Skull—Golgotha. This was so everybody knew there was a God in Israel.

In Gen 22 Abraham was told to sacrifice his own son on Mt. Moriah. Fast forward a little and David decided to number the army. His attitude was wrong. He skipped the gentiles and numbered Israel. When the ark was coming home on the cart, David worshipped, dancing. There was praising going on. This was a new kingdom and everybody could see the ark. The cows which lead the ark stumbled. Uzzah grabbed the ark to keep it from falling and fell over dead. God killed him because he touched the ark.

David scratched his head because he didn’t know why. He took it to a gentile’s house. God blessed that house. David did a little bit of prayer and study and found out he had brought the ark wrong. You can’t have God’s blessings or presence unless you do things God’s way.

So, David brought the ark seven miles, making sacrifices all along the way. They prepared for this procession. There was worship. 4000 singers, 4000 doorkeepers, 285 song-writers, scribes to write it all down. David made the instruments himself. He handpicked the people to play specific instruments. He set up shifts of services, 24 hours a day, 7 days a week. Not only did he want them to sing, he wanted them to preach and to prophesy. There were TRUTH and SPIRIT. This is the symbol of the never-ending Kingdom.

True worship, Spirit and Truth, will make it to heaven. This is the restoration of David’s church. This is that which was lost.

You need the presence of God. There are people and spirits and things that will try to stop you from getting that. The true church which is prophetically shown to us through David will fight and stand our ground. There will be worship in God’s Kingdom. Everybody has value. Everybody has the right to worship the One True God.

David even had a gentile army. Peter had a vision that the gentiles would come in and be a part of God’s Kingdom. Gentiles were cleansed.

How can you let your enemies be your friends? Aren’t you supposed to destroy your enemies? Abraham Lincoln said, ‘Have I not destroyed my enemies when I make them my friends?’

This is for whosoever will.

Excerpted from a sermon preached by Pastor Anthony LoCascio.

If you are in the Chicagoland area, come to The Life Church located at 3030 Central Road in Glenview, IL. Services are Sundays at 1pm and Wednesdays at 7pm. We would love to see you there!

This site uses Akismet to reduce spam. Learn how your comment data is processed.